Is the Mediterranean Diet Right for You?

Everyone is talking about the Mediterranean diet. But what’s the story? Its name gives us a helpful hint! The diet is based on the eating patterns of those who live in the Mediterranean, so it was originally influenced by the types of foods naturally grown in the region.1 Although the Mediterranean is a large region populated by individuals from different countries, cultures, and with different culinary traditions, the people who live in the area tend to consume foods that fall within a similar food pattern. There’s lots to learn — it just so happens to be one of the healthiest diets in the world!5

So What Do I Eat?

Mediterranean diets focus on plant-based foods, including fruits, vegetables, nuts, legumes, and cereals (such as bread and pasta), with a particular emphasis on whole grains.1,2 The climate and its location by the sea make the region a mecca for bountiful harvests and fresh-caught seafood. Sounds like the land and sea are really looking out for people! Although fish and poultry are incorporated in the diet, most meat is consumed in limited amounts in the Mediterranean style-eating pattern.2Dairy products are also consumed in moderation, but cheese and yogurt are a substantial part of the diet.2 Plus, people aren’t the two-egg omelet every morning type — most who follow the Mediterranean pattern only consume four or fewer eggs a week. Sweets and desserts, which often contain fruit, are kept to a minimum.3 Wine is generally consumed with meals, but generally in modest amounts.3 Foods in the Mediterranean diet are naturally low in salt, because they’re closer to nature and less processed.3 Last, but certainly not least, a major component of most versions of the Mediterranean diet, and part of what makes its food soooo delicious, is the major prominence of olive oil.3 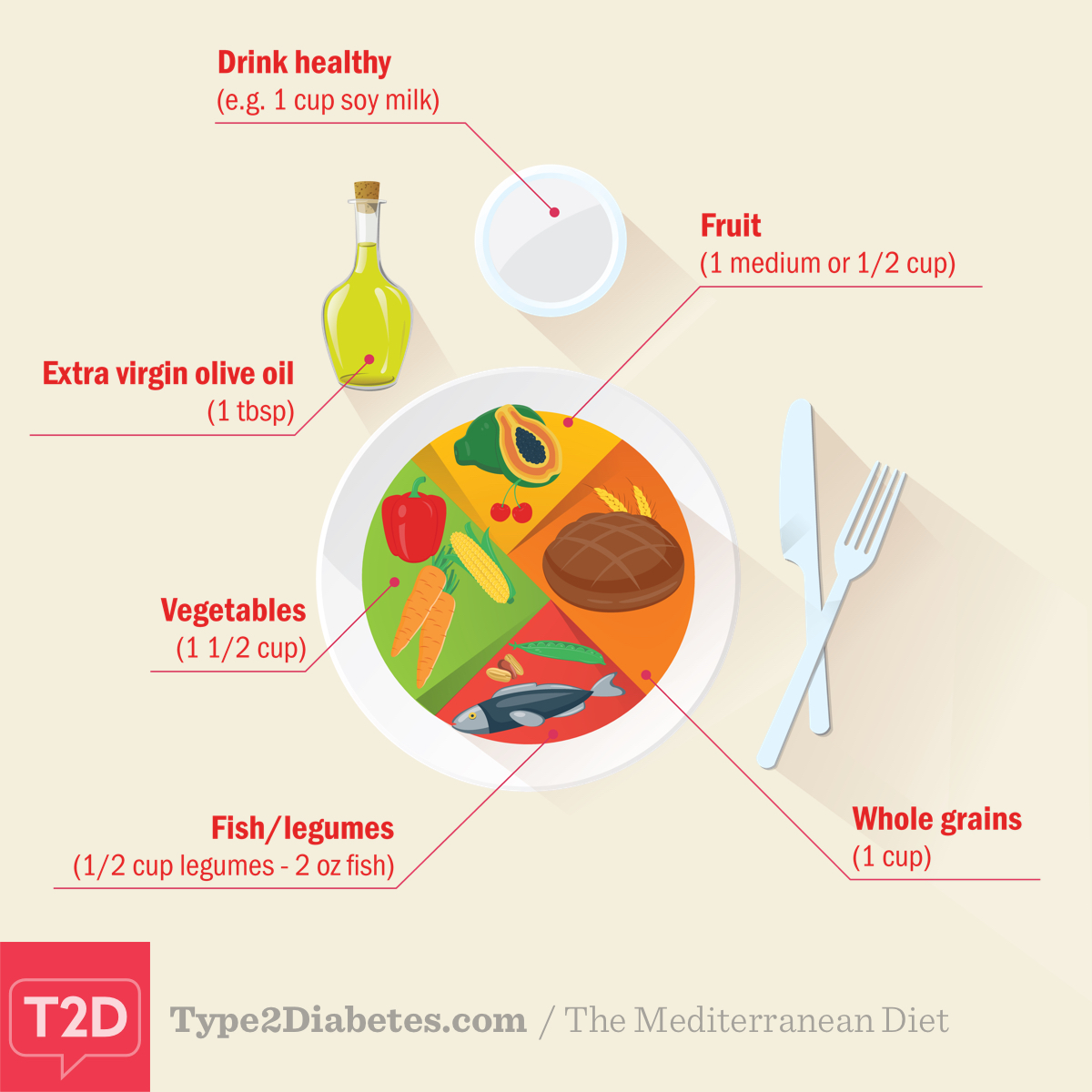 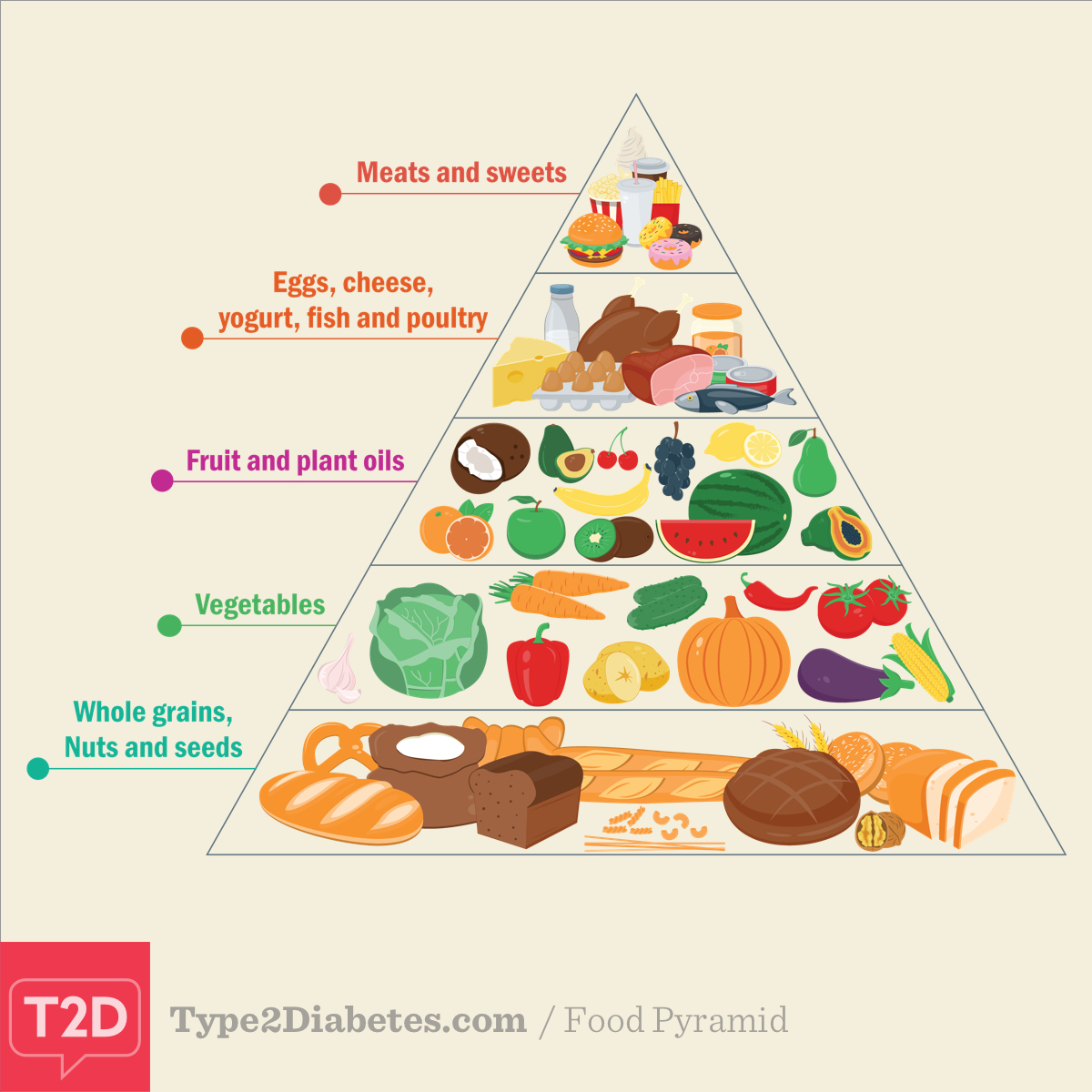 The diet’s emphasis on olive oil, one of its most defining characteristics, originated because olives are prominently grown in many areas in the Mediterranean region.2 So it’s no surprise that this food became such a central component of the diets of Mediterranean natives. To our knowledge, there is no other diet that focuses so heavily on such a central food item.

Due to the naturally high fat content of olive oil and some of the other diet components, nearly half of the calories in the Mediterranean Diet come from fat.2 But be sure to note, type of fat is more important than amount! In this diet, olive oil and nuts provide health-promoting monounsaturated fats. This type of fat is different than saturated fats, found in meat and other animal products, which have been associated with increased risk of heart disease and diabetes.2

Say Cheese – just not too much!

While the eating pattern incorporates some low-fat or fat-free dairy, it emphasizes to eat no more than moderate amounts of dairy products. Rather than outlining a minimum amount or a goal for dairy or other food groups the Mediterranean diet stresses everything in moderation.4

Alcohol - The drink of the Gods

The Mediterranean Diet encourages consumption of a moderate amount of alcohol, specifically wine, on a daily basis. The more shocking aspect of this recommendation is not necessarily the inclusion of alcohol itself, but rather the reason for its incorporation. Research reveals that consumption of sensible amounts of wine, especially red, can protect against heart disease – but beware of too much of a good thing! If you have had cancer or you have genetic risk factors for cancer, consult with your doctor before imbibing.

How to Balance Your Type 2 Diabetes While Eating Out

0 comments
This article represents the opinions, thoughts, and experiences of the author; none of this content has been paid for by any advertiser. The Type2Diabetes.com team does not recommend or endorse any products or treatments discussed herein. Learn more about how we maintain editorial integrity here.

Have you experienced any complications from diabetes?